Posted on March 15, 2012 by sleepless in turtle island

Here are the lyrics:

Freedom Is A State Of Mind

Even in the initial stages of contact between European Christians and
Native Indian people the stage was set for ethnocentrism, and the
attitude towards the Indians was that of Christian superiority. The
Indians were read a proclamation in Spanish which they had no hope of understanding, they had no hope of understanding the death sentence they were being read, and it went something like this:

“We ask and require you to acknowledge the church as the ruler and
superior of the whole world and the high priest called pope and in his
name the king of Spain as lords of this land. If you submit we shall
receive you in all love and charity and shall leave you, your wives and
children and your lands free without servitude, but if you do not submit we shall powerfully enter into your country and shall make war against you, we shall take you and your wives and your children and shall make slaves of them and we shall take away your goods and shall do you all the harm and damage we can.”

2000 years ago we were all tribal.
Then came the missionaries with their f-g bible.
1492 began the termination
The holocaust of our Indian nations
Yeah, with Christian love and a moral authority
They killed our medicine men and stole our country
I never claimed this s* was poetry
It’s just the f-g lies of Christianity
You will pray to the lord and get down on your knees
Here’s a cross for your back and the coughing disease
Though you helped us survive we will laugh while you bleed
Then deny what we did, write our own history
We will kidnap your children and cut off their hair
Silence their language and outlaw their prayers
Beat them blind until they believe
In the blood of Jesus Christ our king
Christians murdered Indians
Columbus murdered children and now we have a holiday
Still you want to deny your history
Look to the sky for your god to justify
As you commit cultural genocide
Christians came and the natives they did hang
13 at a time for Jesus and his gang
We are the ones you had to dehumanize
So your murder and greed could be justified
The belly of the church is full
With the blood of all those heathen fools
Who would not receive the gift of Christ?
So we burned them as a sacrifice
To our baby killing god above
To our mother church and all her love
We will steal their gods and subjugate
Those who don’t believe we’ll annihilate

“The Spaniards made bets as to who would slit a man in two or cut of
his head with one blow. They tore babies from their mother’s breast by their feet and dashed their head against the rocks. They hanged Indians by thirteen in honor and reverence for their redeemer and their twelve apostles. They put wood underneath and with fire burned the Indians alive.”

Christians murdered Indians
We believe in the earth, the sky and dreams
The universe and the creator who gave us these
The sacred gift of life and human beings
That makes you perpetrate the hate to annihilate
So here I am the savage civilized
Voice of the dead and my ancestor’s cries
And like the ghosts of this land you can’t erase
I see blood on the hands of the master race.
500 years of manifest destiny
500 years of resistance to the enemy
You have faith in the rivers, the mountains, the trees
We’ve a murdering god to replace all of these
With the blood of forgiveness you too can be free
Or the wrath of Jehovah you’re sure to receive
We will baptize you with the blood of the lamb
With the sword and the gospel we will conquer your land
You will join our church and be glad to be saved
Or we’ll slaughter your children and your women we’ll rape.
Christians murdered Indians
I see blood on the hands of the master race.

Extremely heavy stuff.  But if the shoe fits, guess ya gotta wear it, no?

There´s a book with a similar theme: American holocaust: the conquest of the New World

One example of this is the Conestoga Massacre:

This is where a group of Christian Indians were murdered by the Paxton Boys.  Check out the Wikipedia entry: 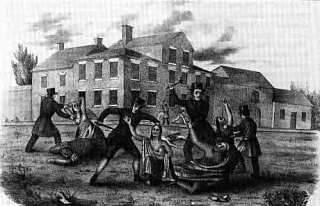 By Beverly Pfingsten, February 24, 2008
Ever wonder why Turtle Island (North America) is so screwed up?  Just read up on the REAL history, and you´ll find out what European conquest of the land really did.  I am amazed that people would have the audacity to claim that the European nations of Canada and the US were founded on Biblical principles.  Unless it was the Satanic Bible . . . which reflects Social Darwinism here:

“Death to the weakling, wealth to the strong!”  Scary quote from Satanic Bible, p. 29, point 1.

Amazing how the real Satan used people who claimed to believe the Bible to oppress and massacre the neighbours whom the settlers should have loved as themselves!
And these misguided people were not just a few bad apples among many in the basket of Turtle Island.  Christians were actively involved, and those who were disgusted at the prospect of Christ-followers committing unbiblical atrocities should have somehow made their voices louder in protest.
A quote from Vine Deloria Jr in God is Red: A Native View of Religion:

¨And if the exploiters of old were not Christians, why did not the true Christians rise up in defiance of the derogation of their religious heritage and faith?¨ Deloria quote

And what do the Sacred Scriptures (from Yahweh not Anton LaVey!) say?

Speak up for those who cannot speak for themselves,
for the rights of all who are destitute.
Speak up and judge fairly;
defend the rights of the poor and needy.     – Proverbs 31:8-9 NIV

Well, the First Nations were not mute, destitute, poor and needy until we Europeans came along!  In the history of the human race, the original inhabitants of Turtle Island have probably suffered more in intensity and length of time than any other groups.  We need to take responsibility for this, and do right by the First Nations. Now is better than never!!!

Thank God many First Nations are still here, alive and kicking, after all they have been through.  Now is the time to do a 180 and support First Nations!

Hi, I´m Dimitri. I have lived in Turtle Island for awhile now, so my cultural understanding is slowly improving. Also, I can see things in this place that boggle my mind. Thus this blog...
View all posts by sleepless in turtle island →
This entry was posted in Uncategorized and tagged American history, Canadian history, Christian history, First Nations, genocide, massacre, North American history. Bookmark the permalink.