Posted on April 14, 2012 by sleepless in turtle island 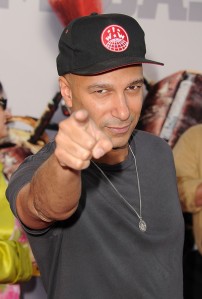 Tom Morello - Take the Power Back!

I came across a cool quote from one of my heroes, Tom Morello, one of the wildest and most accomplished guitarists on the planet.

Tom was commenting in an interview on the fact that some of his Rage Against The Machine fans are puzzled when they come across his much tamer but equally as politically evoking act, the Nightwatchman:

When I play open mic nights, it’s announced as the Nightwatchman. There will be kids there who are fans of my electric guitar playing, and you see them there scratching their heads.

But it’s something that I enjoy doing. I look at it more as an extension of my politics. Then again, some of the songs are not explicitly political. It really helped me grow as an artist and songwriter. Once you prick the vein you never know what is going to come out. You could aim for all union songs and you find yourself in other territory. (My emphasis, interview with the Progressive,
http://www.progressive.org/mag_intvlizdmorello, accessed today)

¨Once you prick the vein you never know what is going to come out.¨  Woah, who could ever think of such imagery for describing the creative process!

One other amazing answer from the interview is as follows:

Q: How do you reconcile being anti-corporate and being on a major label?

Morello: Rage Against the Machine sold fourteen million records of totally subversive revolutionary propaganda. The reason why is that the albums were released on Sony and got that sort of distribution.

You have two choices. I admire bands like Fugazi that take the other route. They are completely self-contained and independent. But if you do that, then you have to be a businessman. Then I have to sit there and worry about the orders to Belgium and make sure they get there. That is not what I’m going to do.

We’ve had, in Rage Against the Machine and Audioslave, complete artistic control, 100 percent over everything. Every second of every video, every second of every album, every bit of advertisement comes directly from us. I don’t even look at it as a tradeoff. You live in a friggin’ capitalist world. If you want to sell 45s out of the back of your microbus, God bless you. And maybe that works better, I don’t know. I’ll see you at the finish line.

I believe that Tom hit the nail on the head.  The goal of people like us is: INFLUENCE.  To re-shape your society, you must influence it.  If you do not influence society for the better, some a*****es will come along and influence it for the worse.

We´re not in a friggin´ game.  This is the Matrix.  This is war.  People´s lives are at stake.  The planet is at stake.

Rise up, folks.  Take the power back!

TAKE THE POWER BACK

Bring that shit in! Uggh!

Yeah, the movement’s in motion with mass militant poetry
Now check this out…uggh!

In the right light, study becomes insight
But the system that dissed us
Teaches us to read and right

So called facts are fraud
They want us to allege and pledge
And bow down to their God
Lost the culture, the culture lost
Spun our minds and through time
Ignorance has taken over
Yo, we gotta take the power back!
Bam! Here’s the plan
Motherfuck Uncle Sam
Step back, I know who I am
Raise up your ear, I’ll drop the style and clear
It’s the beats and the lyrics they fear
The rage is relentless
We need a movement with a quickness
You are the witness of change
And to counteract
We gotta take the power back

The present curriculum
I put my fist in ’em
Eurocentric every last one of ’em
See right through the red, white and blue disguise
With lecture I puncture the structure of lies
Installed in our minds and attempting
To hold us back
We’ve got to take it back
Holes in our spirit causin’ tears and fears
One-sided stories for years and years and years
I’m inferior? Who’s inferior?
Yeah, we need to check the interior
Of the system that cares about only one culture
And that is why
We gotta take the power back

Hey yo check, we’re gonna have to break it, break it,
break it down
Awww shit!

Come on, yeah! Bring it back the other way!

Europe ain’t my rope to swing on
Can’t learn a thing from it
Yet we hang from it
Gotta get it, gotta get it together then
Like the motherfuckin’ weathermen
To expose and close the doors on those who try
To strangle and mangle the truth
‘Cause the circle of hatred continues unless we react
We gotta take the power back

Hi, I´m Dimitri. I have lived in Turtle Island for awhile now, so my cultural understanding is slowly improving. Also, I can see things in this place that boggle my mind. Thus this blog...
View all posts by sleepless in turtle island →
This entry was posted in Uncategorized and tagged creativity, political rock, Rage Against The Machine, RATM, selling out, take the power back, Tom Morello. Bookmark the permalink.