Posted on October 20, 2012 by sleepless in turtle island

Set in 2003 on the Turkish-Iraqi border where the Kurds have their homeland, Turtles Can Fly portrays the story of an enterprising group of orphans who are trying to survive the horrors of war.  13-year-old “Satellite” (Soran Ebrahim) marshals the energies of the few dozen Kurdish children and teens in order to set up satellites in the villages of the area.  They first collect and sell land mines to arms dealers, using them to exchange for satellite dishes.  On the eve of the American army’s invasion of Iraq, everyone is on edge and desirous to hear the news of when the war will start.

This 2004 Iranian film from acclaimed director Bahman Ghobadi who gained critical and popular acceptance through his 2000 movie, A Time For Drunken Horses, again discusses the plight of Kurdish children stuck between countries at war.

On an emotional level, this movie hit me right in the gut.  Every workday I see people from Iraq and other Middle East and African countries, many of which are at war.  Just yesterday, while doing settlement outreach in a local library, I had two clients from Somalia, one applying for citizenship, and the other trying to sponsor his relatives from the refugee camp in Kenya.  I have been working with and befriending refugees since 1983.  Then, from 2008 onwards, I have been getting to know the people and history from our Turtle Island (one native word for North America) aboriginals.

I am white, my grandparents hailing from Norway.  In Turtle Island, I am from the privileged class.  However, due to my belief in Yeshua the Messiah since the late 1970s, I have never wished to stand in that position of power and entitlement.  Yahweh, the Creator of the universe, has always given me a tender spot in my heart for the suffering and oppressed.  And as I move into my mid 40s, the strong, burning sense of social justice just keeps raging more ferociously.

As I love to watch foreign films, I found that Turtles Can Fly is a real eye-opener.  Satellite, the boss-boy for the 30+ orphaned Kurdish youth, uses his gift and skill of leadership to rally the troops to collect, sell and earn a living from land mines.  Not only is he cunning and enterprising, but he is willing to sacrifice his life for the boys and girls under his care.  When the small child of the film, Rega (Abdol Rahman Karim), wanders into a mine field, Satellite goes to fetch him, nearly blowing off his foot in the process.

We discover during the course of the movie that Rega is not the little brother of Agrin (Avaz Latif), the tortured girl who constantly dreams of suicide and a means to kill the little boy, and her armless, prophet-like brother Hengov (Hirsh Feyssal).  In fact, Rega is Agrin’s son, conceived during her rape at the hands, or should we say, power-sticks, of Iraqi soldiers who destroyed her village, including murdering her parents.  Whereas she is always trying to get rid of Rega, the innocent child who reminds of her the rape, Hengov is constantly protecting his little nephew.

Hengov, commonly known among the orphan work gangs as The Boy With No Arms, is a very interesting character.  At the start of the film, you see him disarming mines by simply leaning over and pulling the trigger out with his teeth.  He rallies some of the orphans to work for him, so Satellite threatens him, only to get headbutted to the ground.  But over time, as Satellite watches Hengov’s predictions come true and develops a deep respect for him.  He is also impressed by Hengov’s care for little Rega.  And lastly, Hengov’s sister is pretty attractive to Satellite, who constantly tries to woo her, only to be rejected every time.

Turtles Can Fly is a movie with lessons in affection, dealing with trauma, leadership, practical survival in times of crisis, and being an ethnic group not only without power but stuck in the middle of competing forces from Iran, Turkey, Iraq and the Western countries.  It is a story of loyalty to friends, sacrifice for the weaker and more vulnerable members of your group, and romantic love in the midst of war.

In a sense, the Kurdish orphans of Turtles Can Fly are a microcosm of a larger world of oppression, and those who try to survive and thrive in it.  Turtle Island (Canada and the U.S.) has its own Kurds who have been abused for centuries, the First Nations.  Add to this many suffering minorities and even our own PWTs, Poor-White-Trash, whom I rename “Poor-White-Treasures”, the perpetually expanding underclass of North America.

Like Satellite, Hengov and the other characters of Turtles Can Fly, we need to watch out for one another.  With all the Fascist leaders all over the world, this life is war, and we’re all in it together.

A visually-impaired Rega, looking up to the blurry image of his hand against the backdrop of a huge sky.

One of Satellite’s sidekicks

Hengov after a tortured, prophetic dream

Rega just mining his own business 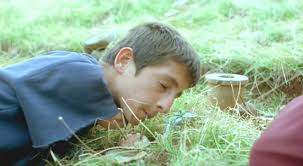 American pseudo-saviours coming to cash in on Iraq’s oil

Satellite and the boys

Hi, I´m Dimitri. I have lived in Turtle Island for awhile now, so my cultural understanding is slowly improving. Also, I can see things in this place that boggle my mind. Thus this blog...
View all posts by sleepless in turtle island →
This entry was posted in Movies and tagged Bahman Ghobadi, Iraq War, Kurds, land mines, orphans, Turtles Can Fly. Bookmark the permalink.