The Condemnation of the Western Church, the Whore of Babylon

Posted on October 26, 2012 by sleepless in turtle island

I am of the belief that Westerners, especially from the tribe I used to belong to for 30 years and am now “betraying”, the Evangelicals, are condemned in the eyes of the Creator of the universe.

In fact, this isn’t betrayal.  This is my “re-awakening”, just as when Neo in the Matrix had to see how the Machines were “growing” and “harvesting” humans for their own energy consumption and thus had his “epiphany” or “wake-up” moment.

I realised 2 facts about Westerners, and especially Evangelical church people:

One reason we are so corrupted is that our evil is not readily seen.  We go to church.  We talk nice, dress nice, look nice, even seem to act nice.  That’s why my friends and others I meet, who hear my theses, think that I either have a mental problem, or am extremely spiteful.  Everything in the Evangelical World seems OK.  Maybe there are a few bad apples, but on the whole, we’re pretty nice folks, they figure.

I’m sure the Christian churches who supported Hitler and the Nazis thought they were alright.  Yeshua (Jesus) Himself said: “Those who kill you will think they are rendering service to God” (John 16:2).  This is twisted logic, religion gone extremely bad.

But we’ve done it all over again.  And this time, it’s our own faith in the media and our own technology that’s do it to us.

Marshall McLuhan, the University of Toronto professor and media guru of the Vietnam War period, theorised that technology is an extension of our bodies.  The wheel extends our feet.  It takes us faster and further than our feet can.  Clothing is an extension of our skin.  It provides the warmth and covering for modesty that our skin can’t.  Computers are an extension of our brains.  Technology expands the power of our bodies.  I can’t shout to Paris, but through the telephone and email, I can.  I can’t run 150 km/h, but my car can take me that fast.  In fact, I become god-like.  My only limit is the boundaries of the ability of my present technology.  In a few years, with more advanced tech, my capabilities will extend even further.  Nirvana.  Heaven.  I am invincible.

Thus, I would argue that our technologies take us a few steps further from the actions we do.  They distance us from the immediate consequences of our actions.

U.S. air force pilots could bomb the hell out of Hanoi in the late 60s and early 70s, and not feel the same kind of remorse had they been deployed on the ground and killed people with their bare hands.  Shooting someone a quarter mile away is much different than strangling them.  I feel less.  My conscience doesn’t bother me as much.  I am distanced.

And I fear that all the war game simulations we play on video games, and all our James Bond-type movies end up distancing ourselves further from the overwhelming feeling from murdering others.  Genocide becomes normal, natural, comfortable.  But take some of these gamers and stick them in Iraq and Afghanistan.  Put them smack in the middle of a war zone, and see how it affects their emotions.  They’ll end up becoming traumatised like many war veterans, refugees or torture victims.

SAAD – sin at a distance.  We vote for Bush.  We support going into Iraq.  Thousands upon thousands of Iraqis die.  We don’t care, because we are distanced from the result of our support for Bush and the war.  We have believed a lie, and millions of other people on the other side of the planet feel the direct consequences.  For us, we just have another event to watch on the evening TV news.  Distanced.

“Because punishment for sin is delayed, the hearts of the sons of men are bent on doing evil,” said the author of Ecclesiastes (8:11).  In other words, when you are far from the consequences of your actions, you start not giving a damn.  Distanced.

I reached my Break-Off Point with the Evangelicals in January 2012.  I said, “Enough!” and divorced them in my heart.  I committed to never, ever attend church again for the sake of fellowship, or teaching, or whatever.  I will only go to weddings, funerals, or as a researcher or spy trying to gain updates on what the Evangelicals are doing.  I am no longer part of the tribe.

Going a step further, I am the new opponent of Evangelicals.  I will not cease to criticise them.  One man offered me a quote: “The Church may be a whore, but she is still my mother.”  Bull-shards!  Yahweh’s people are not prostitutes.  They may be imperfect, but they are called, chosen and faithful.  They DON’T follow the present world’s system.  The only whore is what the last book of the Bible – Revelation – reveals as the Great Whore, Babylon, the ultimate anti-Christ and enemy of good.  She is not the true Church.  But I do think she represents America and the entire Western capitalist system.  And behind her, the churches of the Evangelicals.

Call me a heretic, an extremist, a crazy man, whatever.  I can handle it.  But the Evangelicals are implicated in genocide at home and abroad.  They support a system that is killing and empoverishing millions.  And soon these “chickens” will “come home to roost”, as the Reverence Jeremiah Wright predicted in his well-publicised sermon condemning American aggression around the world.  Evangelicals will pay for supporting Babylon, the Great Whore, the Matrix, this twisted, dark and evil System.

God in Heaven above also reaches His Break-Off Point.  He says, “That’s enough already!  I’m disowning you!”  He did it to the Israelites in the Old Testament of the Bible, and He’s doing it to us Western Evangelicals.

The only difference is, whereas the children of Israel were indeed once God’s people, we never were.  We only thought we were.  In fact , we inherited a System of genocide and oppression from our forefathers.  The Church had already bloodied its hands in the murder of millions of First Nations in the Americas and indigenous peoples around the world, as we Europeans spread out across the globe, bringing destruction with us.  We murdered Muslims in the Crusades and now we’ve been starting new Crusades against them at home and abroad.

For example, did you think the Puritans who supposedly left England due to persecution and landed in New England were pure?  No, they ended up destroying Native American villages and killing their inhabitants with impunity not long after they arrived in America.  They used their theology of Joshua and the Canaanites to justify it.  They treated the natives as people without a soul.

And that’s how we treat the “enemy”: as if they are soul-less, non-persons.  That makes it easy for us to send in our armies, mercenaries and spies to kill them.

And that’s when the God of heaven and earth abandons us and becomes our enemy.

And we will be feeling His wrath very soon.

I know it’s hard for people to believe.  Evangelicals seem right in their own eyes.  The sins are always from “someone else”, “out there”.  But this time it’s right at home.

Repent, the kingdom of Heaven is at hand.  Abandon the Whore, this fake “Mother” called the Evangelical churches, and form new, small, home-based groups of people who have renounced genocide and oppression of the poor, and who have taken up Yeshua’s mission of social justice.  Not the kind that simply votes for a government to offer hand-outs to the destitute.  But the multi-faceted social justice that on the one hand reaches out to heal, instruct and bless impoverished folks, but on the other hand raises a fist to protest against a System that continues to crush the weak under its tank wheels.

Join the fight, join the revolution.  Renounce the Matrix, the Whore, Babylon.  Evangelicals, it’s not just the Catholic Church.  It’s YOU!

Join the true Church.  The one who’s NOT a prostitute. Having a good time drinking the blood of the oppressed

A still from the early film “Metropolis” 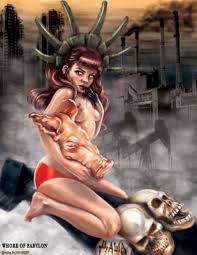 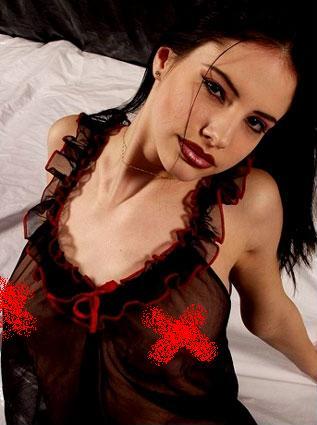 The Church who claims Jesus’ Name, and yet hates God and neighbour: so seductive, and yet so poisonous

3 Responses to The Condemnation of the Western Church, the Whore of Babylon