Where Christianity Really Came From: Constantine, the Roman Emperor

Posted on November 17, 2012 by sleepless in turtle island

The religion that has been falsely claiming for years to be the true faith of Jesus the Messiah actually started through a Roman Emperor co-opting the religion for his own political purposes.  From 312 CE/AD until now, what you have seen is not the movement Yeshua started, but a counterfeit produced by turning love for God into love for power, popularity and money, and love for neighbour into Hustler-ism, or using your neighbour to get what you want.  This is the essence of Western culture, and the bastard child that grew up along with it, Christianity:

Constantine, the Man Who Opened the Door for Christianity

We are all aware of the story of Jesus, his disciples and what impact they had on the spreading of Christianity, yet there is one man in history who did more than all of these men put together to make Christianity an accepted religion.

In 312 C.E., everything changed for Christianity. Historically, Christianity was a threat to the Roman Empire and all who claimed to be Christian were dealt with in a swift manner. An odd thing happened to Constantine on the dawn of battle that would set in motion a number of factors that would change Rome, and indeed the world, forever.

Constantine and his army were headed to Rome to eliminate the tyrannical Maxentius from power. Now, the army of Maxentis well outnumbered Constantine’s, and victory was far from a sure thing. While there are several different accounts of what actually happened, the most widely accepted is that Constantine, on the dawn of battle, had a vision in the skies above him. A flaming cross appeared to him along with a voice that said In Hoc Signo Vinces, “In This Sign, You Will Conquer.” Constantine took this as a sign from the new Christian God that his fight was the right one, which gave him the confidence to face Maxentius knowing that victory was virtually assured.

The Edict of Milan

The cross Constantine saw was a combination of first two letters for “Christos,” in Greek known as the Chi-Rho. To us, we would say it was a P inside of an X (Χριστός). Constantine took this symbol and made his men paint it on their helmets and shields. As you can infer by now, Constantine won the battle and took over Rome as the new Emperor. This was the first step in the Christianization of Rome, and later, the world.

Owing his victory to the Christian God, Constantine vowed to return all confiscated property, free them from persecution, offer them compensation and provide religious tolerance so they could practice their religion freely. Now, for you history types, you know that at this point in Roman history that the empire was divided into the Western Empire and the Eastern Empire. This made things rather difficult when one wanted to change an established idea while the other wanted to remain the same. Constantine had to reach out to Licinius, the Emperor of the east, in order to establish freedom for the Christians.

In 313, C.E. the Edict of Milan was the name of the agreement the two Emperors signed, allowing rights to Christians in both the East and the West. Licinius was reluctant to sign this agreement, yet did so out of respect for Constantine and his powerful army. Seven years went by and Licinius decided that he had had enough of this and began to persecute Christians again.

Constantine was not about to stand for this and marched on Licinius. Again, one can guess who was victorious because this piece is not about Licinius. Due to this victory, Constantine united the empire again under the banner of tolerance and freedom for all Christians.

The Council of Nicea
In 325, C.E. Constantine called a council to meet in Nicea (Turkey) to deal with a hereitcal idea by a man named Arius. Arius brought up a valid point by asking, “how can three entities be one?” This was a question relating to the Holy Trinity seeming like three separate entities and appearing polytheistic. Since Constantine was now the Emperor of Christianity, in a manner of speaking, it was his responsibility to answer this question and standardize the religion’s dogma. Nearly 300 bishops were called to Nicea, along with Constantine to determine whether or not the son and the father were of the same substance. After several months of deliberation, they finally decided that indeed the son is of the same substance as the father. Pay attention, because this is the point in history where it was officially recognized that Jesus was actually God. Before this, even his own disciples thought him simply a mortal man who happened to be a unique teacher. It was not until the Council of Nicea that Jesus was proclaimed divine. It is uncertain whether or not Constantine actually believed this, or if it was a smart political move to preserve unity throughout the Empire, but in the end it really does not matter, for the decision was made and Jesus was now deemed divine.

Constantinople
In 330, C.E. Constantine moved the capital from Rome to the Eastern capital, which he renamed to Constantinople. Ever the savvy politician Constantine did so in order to be closer to his home (Serbia) and to make sure that the Eastern Empire knew that he was now the Emperor of the entire empire. Constantine’s motto was “one empire, one emperor, one religion.” Once established, several of the old ways of Rome were put to bed for good. Pagan sacrifices were deemed illegal, Christianity was now spreading to the aristocracy and the entire Roman world had a new center of gravity and purpose.

Constantine was surely no saint, and there is a laundry list a mile long of the reprehensible things he did while Emperor, yet he did make inroads for Christianity like no other before him. He began building churches, he printed Bibles, he allowed Christians to own land and serve in the military, but most importantly, he allowed Christianity to spread throughout the Roman Empire unencumbered. This extended well past the death of both Constantine and the Roman Empire. Europe adopted Christianity due to Constantine’s actions and you must know that if you call yourself a Christian it is because of Constantine. Sure, the religion is based around Jesus of Nazareth, but if Constantine did not open the doors for Christianity to flourish throughout the Roman world, chances are it would have died off like every other cult in its infancy.

Eusebius, the Christian historian, continues his description of Constantine’s vision of Christianity:

At dawn of day he arose, and communicated the marvel to his friends: and then, calling together the workers in gold and precious stones, he sat in the midst of them, and described to them the figure of the sign he had seen, bidding them represent it in gold and precious stones. And this representation I myself have had an opportunity of seeing.Now it was made in the following manner. A long spear, overlaid with gold, formed the figure of the cross by means of a transverse bar laid over it. On the top of the whole was fixed a wreath of gold and precious stones; and within this, the symbol of the Saviour’s name, two letters indicating the name of Christ by means of its initial characters, the letter P being intersected by X in its centre: and these letters the emperor was in the habit of wearing on his helmet at a later period. From the cross-bar of the spear was suspended a cloth, a royal piece, covered with a profuse embroidery of most brilliant precious stones; and which, being also richly interlaced with gold, presented an indescribable degree of beauty to the beholder. This banner was of a square form, and the upright staff, whose lower section was of great length, bore a golden half-length portrait of the pious emperor and his children on its upper part, beneath the trophy of the cross, and immediately above the embroidered banner.The emperor constantly made use of this sign of salvation as a safeguard against every adverse and hostile power, and commanded that others similar to it should be carried at the head of all his armies.

In Hoc Signo Vinces, “In This Sign, You Will Conquer.

And what did Constantine really conquer?  The true faith of Yeshua the Messiah, now co-opted for political purposes.

CHALLENGE: Who’s going to join me in bypassing Constantine and his religion, and re-establishing the true faith of Jesus?

Another interesting series of book review about a book defending Constantine:

And now the perverted, Constantinian Christian religion is being used for war up to the present, e.g., in the US Army:

“Imagine yourself arriving to your local veterans administration office for help. You have served in fierce combat, been awarded medals and have been taxed physically by your time in the military. You happen to see a placard and frame of religious rhetoric. Your interest is piqued! You read the display. Your face goes from relatively slack to a faint scowl. That country you are in this office for, injured or otherwise, tells you that it is all for Jesus, because of Jesus. The flag you love and almost lost your life for and watched your buddies die for has been devoted to a religion you do not follow. Remember your Jewish buddy in basic? What about that Hindu soldier that helped pull you to safety after you were wounded? Why is that allowed to happen? Well, walk around a little more. You will find more to be distraught about… Shouldn’t the military remain neutral on these matters? How about a placard of a memorial to those fallen, regardless of faith? 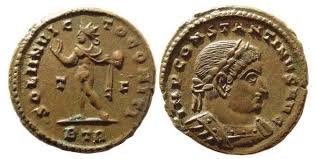 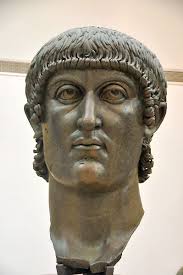 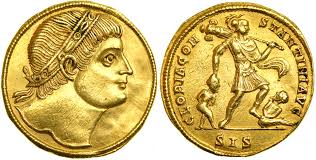 Hi, I´m Dimitri. I have lived in Turtle Island for awhile now, so my cultural understanding is slowly improving. Also, I can see things in this place that boggle my mind. Thus this blog...
View all posts by sleepless in turtle island →
This entry was posted in Christianity & Ex-Christianity, Politics - International and tagged Christian history, Co-opting the faith of Jesus, Constantine, Europe, Hustler-ism, love God, love neighbour, Roman Emperor, the West. Bookmark the permalink.